In the athletic development field coaches often share general philosophies, models, ideas, etc. Someone might talk about things they consider when making decisions, but not share any actual data or actual decisions that were made. I do this myself, and it’s fine, but it tends to result in very generalized information that is less actionable. It can leave you wondering, “Ok, so what should I do exactly?” I aim to remedy this by sharing a recap of a year’s training for a long jumper.

Dillon began training with me in May a few weeks after his high school junior track season. Here are some facts and measurements from day 1... Dillon’s most impressive measure was his top speed. I knew right away that he was much faster than a 25-second 200m seems to indicate. His other numbers, standing vertical for example, indicated pretty average power. This was not surprising given he had no strength training background. It was clear that elasticity allowed him to run as fast as he did, and this quality was visibly evident in his movement. I was eager to see what influence strength training would have.

We started training with some short sprints (60m or less) and some small doses of fundamental strength training (squats below parallel, hip hinges, lunges). I also encouraged Dillon to do an easy running workout, 100m x10 at 75% effort, once per week. In his fourth session with me, 18 days after his first, he sprinted 10m/s through a flying 20m in spikes. To give you an idea of his strength, that same day he did a difficult single squat rep with 200 lbs, only 1.25 times body weight. The following week he averaged 9.9m/s over a 68m flying sprint, which indicates great speed maintenance. At this point I told him he could step into a meet and run a low 11 in the 100m. The first month of training could be described as wildly successful. 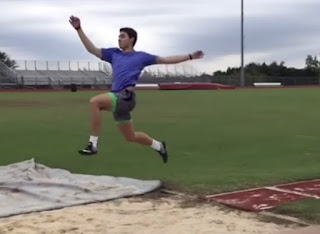 Shortly after, Dillon took a trip to Spain and did no exercise other than walking. There were nineteen days between workouts. When he came back he had a summer meet on the schedule just twelve days away. He had definitely de-trained and lost some athleticism during the trip. We did some short term intervention to try to get it back, but his performance at the meet indicated it had not fully returned. He long jumped 21ft something and ran an 11.5 100m. This was certainly not a bad performance, but I was certain he could have done better a month earlier. The following week Dillon didn’t train but entered another meet and long jumped 6.76m (22’2”) for an 11cm PB.

The next item on the agenda was knee surgery to repair the fissure in the cartilage on the end of his femur. Between waiting for the surgery date and then waiting for physical therapy to be completed afterward, I didn’t see Dillon for close to three months.

He started training again in October. I got him on a pretty consistent schedule of short sprints and lifting twice per week plus one easy volume running day, which he completed most weeks. He got a lot stronger (squatted 250 in December) and improved his acceleration, but his top speed stayed in the 9.6-9.8m/s range. While he was more powerful, his movement seemed a little heavier and not quite as elastic as before. I have talked for years about some of the negative effects of strength training, but in this case I don’t think that was the biggest reason for Dillon being stronger but running slower than earlier in the year. I believe it was simply a lack of volume of elastic activity. When he first started training in May, he was coming off a track season full of running. In October he was coming off three months of rest, surgery, and physical therapy for his knee. Big difference.

Dillon signed up for indoor meets in early December and early January.  The first one ended up getting canceled. Then in mid-December he came down with mononucleosis. He ended up competing in the January meet while still sick and having not worked out in over two weeks. As expected his performance was not special.

I saw him ten days later after he finally got healthy again. At that point he had done very little exercise in the past month along with being sick, so I didn’t know what to expect. His overall athleticism was down, but the power he had gained in the fall was still there. I specifically remember testing him on the 1080 Sprint (a resisted sprint machine that measures force, speed, and power) and being surprised that he matched his best numbers. At this point he had not lifted for eight weeks.

I made the decision to not have Dillon start strength training again. I had seen him sprint 10m/s with less strength and power than he currently had. I was confident he had built potential for the upcoming track season that would result in great performance when he returned to what made him athletic in the first place, running and jumping a lot. Track practice at school started the next day.

I saw him again two weeks later, and the effects of running were already visible in his movement. He had already been to track practice that day, so we didn’t test anything, but I could see the spring in his step returning. Two weeks later I watched Dillon long jump at his first meet. He jumped 6.70m (21’11”) in cold and rain into a headwind at 8:30 in the morning. I knew he was going to have a good year. Next meet was 6.93m (22’9”). Next meet was 7.01m (23’0”). This was excellent, but I thought he had more in the tank still.

Dillon was also training for and competing in the 4x1 and 4x2 relays. Following the 7m jump, the volume in practice started to wear him out. He was feeling fatigued and dealing with shin splints. The next four meets he failed to reach 7m again, but he did manage to win the district, area, and regional meets and advance to state. Both relays failed to get past regionals, so he finally had a chance to rest. The coaches at school said he could prepare however he wanted. (These are football coaches running a track team.) At this point track practice had been going on for 14 weeks with spring break somewhere in the middle. During those 14 weeks, Dillon did nine sessions with me where we mostly did some technical things and tried to keep him healthy.

In the two weeks leading up to the state meet, he rested a lot. After regionals on saturday his only workouts were with me the following tuesday and saturday. We did some speed work, a little long jump, some strength-based jumps, and some depth jumps. (The shins were feeling much better after rest.) Then from that saturday til the state meet the following saturday, Dillon did not train except for a couple warmups earlier in the week. That’s two workouts and two warmups in 13 days. At state he jumped 7.16m (23’6”) for a 15cm PB.

He also ran the open 100m in four meets. He did manage to run 11.12 at the district meet, but this was when he was fatigued. That same day he had his worst long jump performance of the season. I would like to see what he could have run the day that he jumped 7.16m.

COULD I HAVE DONE BETTER?

As an already full grown athlete, Dillon added 51cm (20 inches) to his PB from the previous season. He beat that former best mark in seven of eight meets. This was obviously a fantastic season. I looked back at my schedule and found there were 51 weeks from his first session with me to the state meet. During that time he did 46 total sessions. Most of those were only 60 minutes long. Considering the limited time and the fact that I had no control of his in-season track workouts, I am proud of the work I did and the influence I had on his performance. But if I could go back, there are a couple changes I would explore.