Stop Hamstring Injuries and Get Fast!

Hamstring injuries are the source of much vexation in the exercise field. While the human body and human movement are extraordinarily complex, and a person may possess some unique characteristics that require puzzle solving, I believe the vast majority of hamstring injuries are preventable through simple means:

The following videos and research explain the reasoning behind these simple solutions.

In the past I have used the mantra, "Don't run like an idiot." Of course I do not want to actually call anyone an idiot, but I do sometimes see people sprinting in a way that I believe invites hamstring injury. I am referring to allegedly “proper” sprint mechanics in which the pursuit of frontside dominance is taken way too far.

Rather than super high knees, what we actually need during sprinting is high feet. There is actually such a thing as needing more backside mechanics.

In order to have high feet, we need flexibility in the rectus femoris muscle.

Now we need to talk about hamstring muscle characteristics. It is well known that strong muscles are less vulnerable to injury, but what about muscle length? Is it better to have flexible hamstrings? Some sport actions like hurdling and following through after a kick should feature hamstring flexibility. Regular sprint mechanics should not involve stretching the hamstrings, but all athletes should still have long hamstrings. Why?

If you know your muscle cell anatomy this should make sense, but let’s look at some large scale research.

Study: "Short biceps femoris fascicles and eccentric knee flexor weakness increase the risk of hamstring injury in elite football: a prospective cohort study." 152 soccer players did pre-season hamstring testing, and then injuries during the season were recorded. The results are summarized in the infographic below. It shows clearly that short hamstring fascicles and weakness increased injury risk. FL under 10.56cm multiplied injury risk by 4.1. 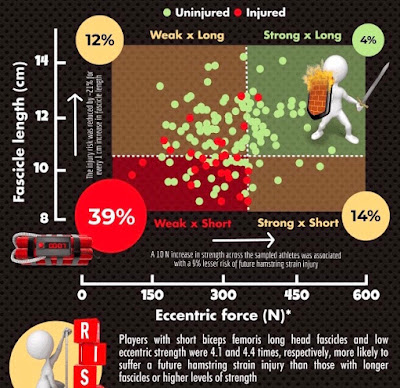 Athletic performance is impacted by many variables, so you can’t expect just one to always yield the right correlation. But a few studies show greater FL in the quads and calves actually does correlate to faster 100m times, even within a population of sprinters. Side by side graphs below are from (1) "Sprint performance is related to muscle fascicle length in male 100-m sprinters" and (2) "Relationship between sprint performance and muscle fascicle length in female sprinters." 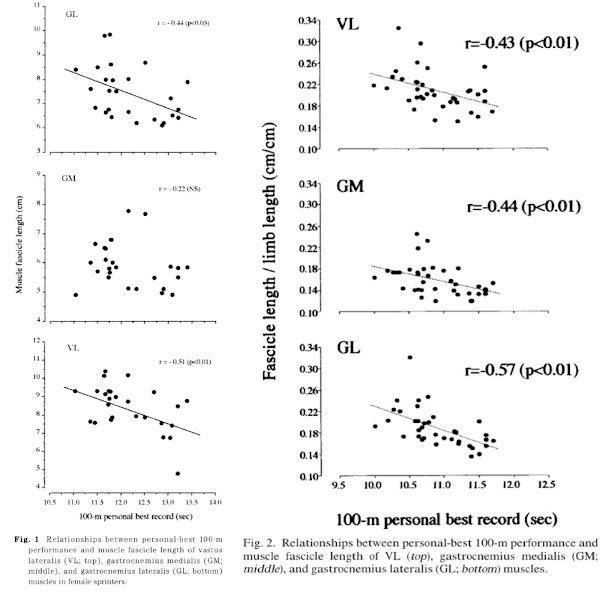 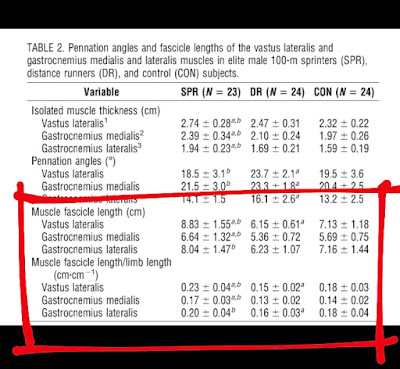 So we definitely want greater fascicle length, but here’s where it gets tricky. Fascicle length and flexibility are not the same thing. FL measures the contractile protein in the muscle, but there is much more to a muscle-tendon unit than just protein. Data shows that stretching clearly increases ROM dramatically but not always FL. Some training can increase FL, but maybe not ROM. So do we actually need hamstring flexibility? Or can we just train to increase FL? One study did show correlation between flexibility and lower injury rates, but this is not really the overall consensus of the research. This still leaves us with questions. Study: "Muscle flexibility as a risk factor for developing muscle injuries in male professional soccer players: a prospective study." 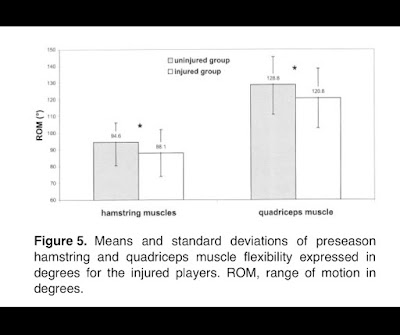 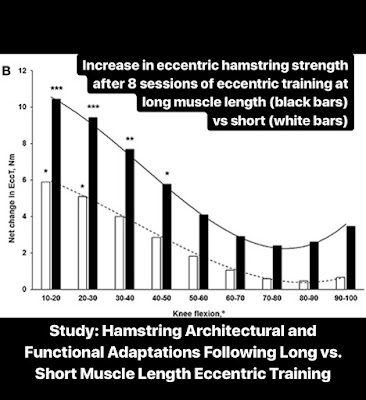 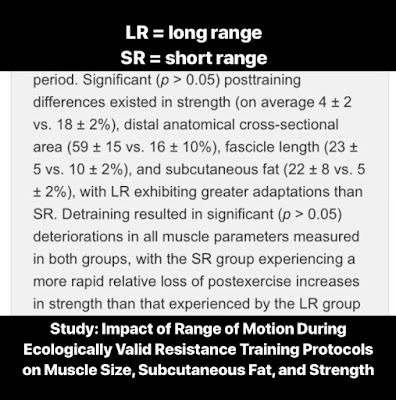 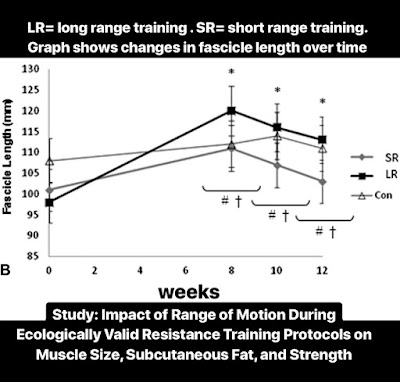 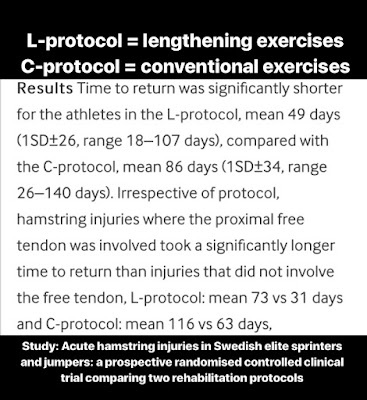 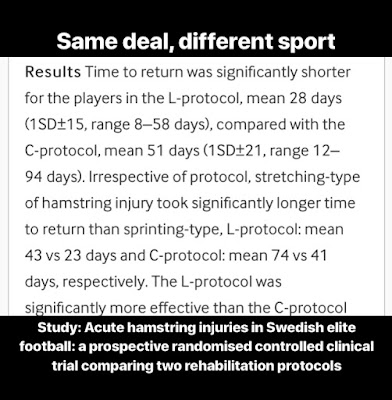 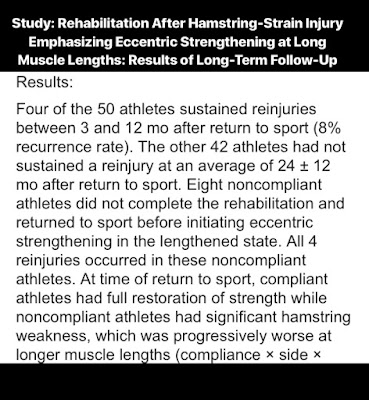 So we want to train the hamstrings at long length and increase strength and fascicle length over time. This can be achieved using hip hinges with long ROM. If you are starting out tight, can you simply strength train to get long ROM? Honestly, maybe over time with consistency, yes. But the process can be significanly accelerated by stretching every day, which typically improves ROM within days. Stretching is not in vogue in the exercise field, but it remains the easiest way to improve range of motion.

Along with long muscle length, the other key component to structural strength development is high muscle tension. This is achieved best during eccentric overload. I’m defining eccentric overload as a scenario when a muscle is trying to shorten with maximum effort but being forced to lengthen by resistance force/momentum. This elicits the highest possible muscle tension. Many people believe this requires weight beyond what can be lifted (supramaximal), but actually this scenario can be created with regular weights by using momentum to add load. So regular hip hinges can provide the perfect structural strength stimulus for the hamstrings. If you don’t believe eccentric overload happens with regular weights, try the following... Do no hamstring exercise for 10 days. Then put around 50% of your deadlift on the bar and do 3x10 fast, deep hip hinges like I do in the video below. The soreness in your hamstrings in the days following will be a strong indicator that some serious overload occurred.

Along with all the research there is plenty of experiential evidence to support this approach as well. A few examples... 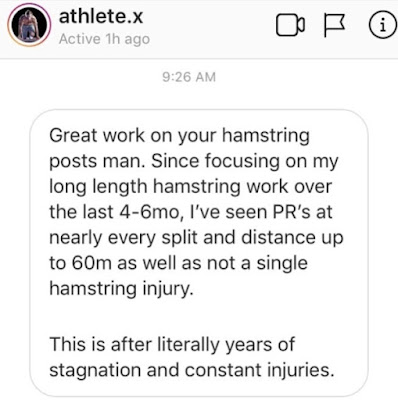 "It´s Douglas here again, the Decathlete from Sweden. First of all i just want to say that the last video you send to me about stiff deadlifts have been a real success for me. I have had muscle strains in the hamstring like 10 times in my career before and it sucks but the last year has been No pain at all! So thank you so much for your videos!"

What about knee flexion exercises? Do we need to strength train this function of the hamstrings as well? Consider separately neurological and structural characteristics.

NEUROLOGICAL. Knee flexion does not drive athletic movement. It controls the lower leg during the late swing phase of sprinting and other movements. This involves low load, high velocity, hopefully submaximal effort muscle action. Slow, heavy knee flexion strength is not relevant neurologically. Training the brain to direct tons of neural drive into knee flexion is not meaningful. This would be a reason why knee flexion exercises are less needed.

STRUCTURAL. As previously stated, variety is a good thing for structural development. Muscle architecture and physiology is more complex than the way it is often described. Because of this, different hamstring exercises place the highest stress on different specific structures within the muscle group. This is why using variety in hip hinges is a good idea, and it's also the primary reason that using knee flexion exercises is a good idea. Hip hinges are a superior general strength exercise, but knee flexion can more thoroughly develop specific spots. This is particularly true for the short head of the biceps femoris (lateral hamstring muscle). The short head only crosses the knee joint, not the hip, so it can only be trained by knee flexion.

Good options for knee flexion exercises include machine hamstring curls, nordic hamstring curls, and hamstring bridge variations. Of these, nordics stand out as the exercise with the most research support. When properly executed, the nordic curl features extremely high targeted hamstring effort and eccentric overload, two factors that create high muscle tension. This makes it highly influential. Research has shown that this exercise alone reduces injury rates. Study: Including the Nordic hamstring exercise in injury prevention programmes halves the rate of hamstring injuries.

While nordics have gained a lot of credibility with good reason, there are some important things to realize. (1) Many people are not strong enough to execute the movement well enough to deliver the desired stimulus. Beginning with an assisted version or just a different knee flexion exercise might be necessary. (2) The eccentric overload in a nordic is the characteristic that separates it as the most effective knee flexion exercise. But there are ways to create eccentric overload in other knee flexion exercises as well (see video below). (3) Nordics do not train the hamstrings at long muscle length. Seated hamstring curls do, which is a reason they might be a better exercise. (4) Eccentric overload is effective because it puts extremely high stress on the muscles. This is a component that all athletes should have in their training, but we do not need to put extremely high stress on a muscle all the time. Some obvious examples are day 1 of off-season training and an in-season workout two days before competition. In these contexts, a simple machine hamstring curl with medium weight may be a better option than nordics. More on that in the next section on workload.

In addition to developing the hamstrings to make them more capable of handling stress, we can also reduce injury risk by avoiding scenarios that create vulnerability. Consider the timing and dosage of high hamstring stress activity. The most common sources are maximum velocity sprinting and some of the strength exercises already mentioned. Sprint hurdling, running jumps with a fast approach, and violent kicking are some other movements to keep in mind. Here are some simple recommendations:

Putting that all altogether, a hamstring training week for a track athlete might look something like the following: Monday: fast sprints, long jump, seated hamstring curls (3 sets of 8-12). Tuesday: submax running. Wednesday: long sprints. Thursday: submax running. Friday: long jump, hip hinges (3 sets of 6-10). This of course would not be week 1 of training but a workload that is reached over time. At the onset of training, the increase in stress and the introduction of exercises typically produces muscle soreness, which means the workload needs to be reduced, paticularly the high intensity workload. 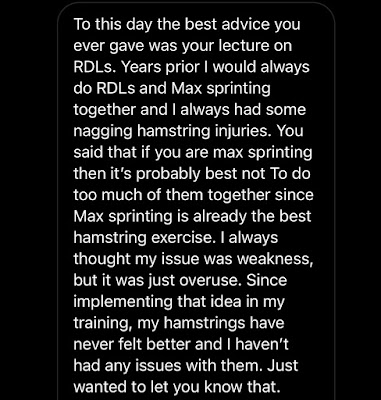 When discussing hamstring training, another thing that needs to be mentioned is that the hamstrings are a critical muscle for ACL injury risk reduction. In research they have tested knee flexion and extension strength and found that the ratio correlates with ACL injury rates. The trap then is to conclude that you should focus on knee flexion exercises. ACL injuries occur during a PUSH into the ground, so in that moment being specifically stronger at the knee flexion pattern is not relevant. It’s fine to TEST hamstring strength with flexion, but your knee flexion should be strong because your hamstrings are strong in general, not because you exclusively trained that movement. Please do your hip hinges!!