Coaching LHR for speed seems to have exploded in popularity. People note that some elite sprinters display a light drag of the toe when leaving the blocks and try to implement a similar technique with all athletes. Rather than experimenting to see what is effective for each individual athlete, the speed training community has largely assumed that these mechanics are effective and then made feeble attempts to explain why. These attempts include claims that LHR does things like reducing air time, allowing correct direction of force application, and keeping proper acceleration positions.

Key components of a good start:

These components of a good start can occur with or without LHR. As an example the picture below shows the moments of toe-off on the first push and the first foot contact following. This start did not use LHR, and the acceleration positions are right on point. There is no reason this athlete needs to sweep his feet just above the ground in order to achieve this. The full start is shown in the videos coming up. 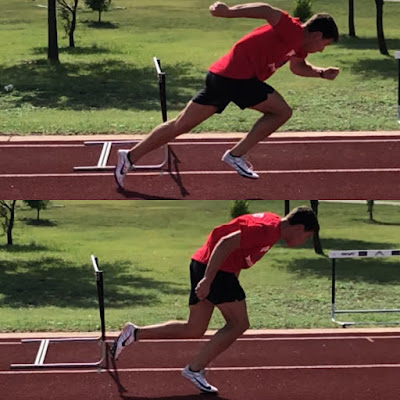 Appropriate air time can also occur with or without LHR. Efforts to use LHR and almost completely eliminate air time result in major braking forces. With these things in mind, IF low heel recovery is effective for an athlete, I do not believe it’s because of proper positioning or decreased air time.

I believe generating more momentum in the swing leg is the potential benefit of low heel recovery. But we have to consider that with the foot low, the leg is harder to swing.

This is where things get tricky. LHR may create more momentum from one stride, but it requires more work be done in hip flexion on the swing leg and in extension of the plant leg. More work takes more time. So there is give and take between maximizing momentum from each push and completing the push quickly. To optimize acceleration we have to find the correct balance between these. Here’s the key:

The point on this spectrum where acceleration is maximized varies from athlete to athlete.

This is influenced by many factors such as power relative to body weight, elastic vs muscle-driven force, height/proportions, and probably 100 other things. The human body is extraordinarily complex. We do not have the ability to calculate optimum heel recovery for any athlete on any stride. Thus it makes no sense to force athletes into an LHR model or any model for that matter. The goal should be extension and a quality foot contact. Heel recovery should take care of itself.

As for a model, the best we can do is maybe identify trends. For example I do not expect a tall, undeveloped athlete to utilize LHR successfully, even on the first step. In higher level athletes I expect to see a trend of lower to higher heel recovery, but that does not necessarily mean they sweep the foot within an inch of the ground on the first step. And it certainly does not mean they do that for several steps. Looking at the start in the video, I do not want to mess with it by trying to utilize lower heel recovery.

Physical abilities influence technique. I have talked about this in the speed context already in Speed Science. The same concept applies to any model for any movement. We have to recognize there will always be a gap between the theoretical ideal model and what is currently ideal for a given athlete, and we need to be wary of forcing athletes to perform a movement strategy to a degree they are physically incapable of executing effectively.

In the case of heel recovery, there may be a trend for great accelerators to use LHR to some degree. Exceptional power may be what makes this work. They are moving a longer lever, but it does not slow them down like it does a low level athlete. This allows them to gain more momentum from each push without much sacrifice of quickness. This does not mean all athletes can use LHR successfully.

The next video compares a natural sprint start to what it looks like when people mess things up with LHR. (Example 1) Most people would probably identify the first example as a bad start on video, but I still regularly see people practicing like this. (Example 2) What’s funny is I was trying to be really quick for this example, but my stride rate was actually slightly lower than on my natural start because the contact time was significantly longer. Plus the strides are shorter. This may not look awful live, but it’s bad technique. (Example 3) Natural sprint start checks the boxes (extension, backward foot action, contact under hip, not excessive air time).

To sum things up, I believe LHR is often over-coached and over-done. Many athletes should not be using it at all. Those that can use it should be doing a much more conservative version than the extreme LHR that I often see. And they should be doing it without thinking about it. Personally when I coach I hope to never need to mention heel recovery. It might be something I explore with an athlete only if the components of a good start are not showing up through simple practice. I am not alone in this belief. Consider the statement below from Chidi Enyia, a sprints and hurdles coach of professional track athletes at Altis. 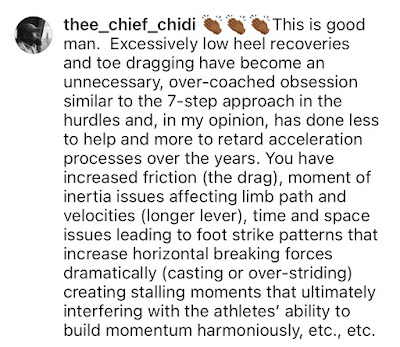