Muscle fiber type is one of those topics on which people love to make uninformed statements. You may have heard things like, "Heavy weights work those slow twitch fibers." Or "I do plyometrics to target fast twitch muscle." Another claim I recall reading as a teenager is that your number of fast twitch fibers is completely genetic and cannot be changed. This is flat out false. Muscle fiber type is adaptable, and this is something that should definitely be taken into consideration in training for explosive athletic performance. Before getting into that, let's do a quick overview of muscle fiber types. Slow twitch fibers produce less tension and take more time to reach peak tension but possess excellent endurance. Fast twitch fibers produce greater tension and reach peak tension more quickly but have very little endurance. Having more slow twitch fibers is helpful for low effort endurance activities. On the other hand, possessing a higher percentage of fast twitch fibers is advantageous for any activity that involves maximum force production such as sprinting, jumping, and yes, heavy lifting. Because heavy strength training features the highest muscle tension, it's actually a fast twitch dominant activity. There is a continuum of fiber types from slow to fast, but we have classified them into three primary types, Type 1 (slow), Type 2A (semi-fast), and Type 2B (fast). A muscle fiber's type is identified by the chemical composition of the head of the myosin protein molecules within the fiber. Myosin heavy chain I, IIA, and IIX are associated with type 1, type 2A, and type 2B fibers respectively. The behavior of the fiber is also influenced by the neuron that activates it. We don't have this relationship totally figured out yet.

Fiber twitch speed is adaptable. It is shaped by activity over time. People may expect this to simply mean that endurance activities yield more slow twitch fibers and high force activities yield more fast twitch fibers. And this does appear to be true if we just compare endurance athletes and strength athletes for example. However when we look at sedentary people, we find that they tend to have more fast twitch fibers than anybody. The graph below shows average fiber type distribution among a small group of runners, strength athletes, and sedentary people. The full study is here: Human Skeletal Muscle Fiber Type Adaptability.... What this tells us is that a need for greater force production is not the defining stimulus that influences muscle fiber type changes. Rather it is a need for endurance. Sedentary people have no need for endurance, so their muscle fibers default toward being fast twitch. 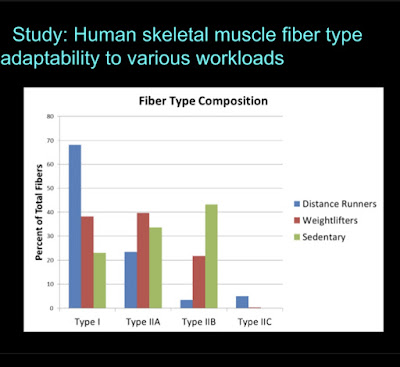 Skeptics of fiber type changes may suggest that the differences between athletes in different sports exist at birth and cause each person to naturally excel in the sport they end up pursuing. While genetics certainly do influence muscle fiber types, a high level of adaptability is clearly evident. In fact the next study examined numerous drastic differences, including in fiber types, between genetically identical people with very different histories of exercise. Muscle Health and Performance in Monozygotic Twins... The graphs below show the major differences in fiber type distribution that developed over time between the sedentary and endurance trained twin. You can see that over time the endurance activity lead to far more slow twitch fibers compared to being sedentary. This makes sense. 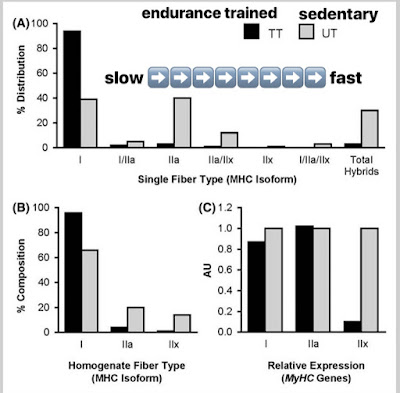 The next piece of evidence is a bit counterintuitive. Rapid Switch-off of the Human Myosin Heavy Chain IIX Gene... In this study sedentary subjects performed just two consecutive days of strength training. In the days following, the gene for myosin IIX (the fastest one) shut off, so to speak. This does not mean that the fibers converted to type 2A already in four days. The actual changes to the protein molecules would have followed later. But the key point here is strength training, even though it is fast twitch dominant, actually caused a shift toward slower twitch speed compared to being sedentary. Now let's be clear. This does not mean that these research subjects would get less athletic from strength training. If they combined some sort of athletic activity with strength training, most likely the gains in neuromuscular strength would far outweigh the influence of type 2B fibers shifting to type 2A. In that scenario these subjects would see drastic improvement in athletic measures. But we still need to make note of the influence of strength training on fiber type. Next we come to one of my favorite topics in all of sports training, the overshoot phenomenon. The research: Myosin Heavy Chain IIX Overshoot.... Again sedentary subjects performed heavy resistance training, this time for three months. At the end of the training, many of the myosin IIX molecules had converted to myosin IIA. This lines up with the results from the previous study. But then the subjects returned to being sedentary, and after three months of detraining myosin IIX content had shot up well beyond the initial level (graph below). This is known as the overshoot phenomenon. Again let's be clear. This does not mean that the subjects were more athletic after three months of detraining. The drastic loss of neuromuscular strength from long term inactivity far outweighs the fiber type changes. The overshoot phenomenon refers specifically to the increase in myosin IIX content. It does not refer to an increase in athleticism. Muscle fiber type is just one small factor in athleticism. 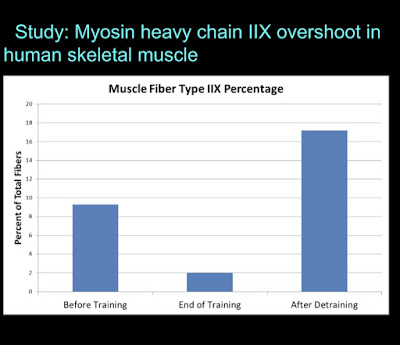 What understanding can we establish from the overshoot phenomenon and the other research? And how can we harness this information to improve training for athletic performance? The key principle to understand is that when muscle fibers are rested, they default toward the fast-twitch end of the spectrum. All activity pulls fibers away from the fast-twitch end, but how far away depends on the nature and volume of the activity. This has practical applications to training. 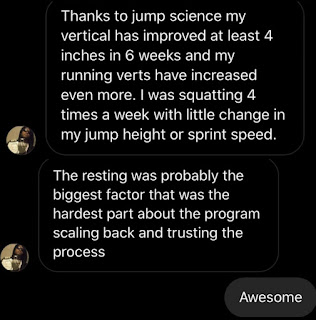 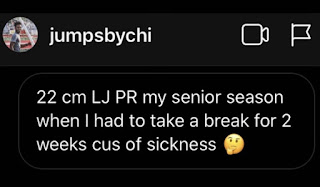 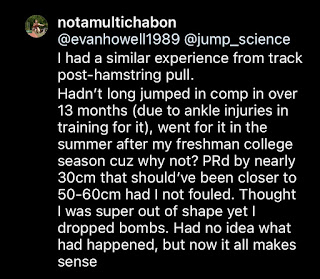 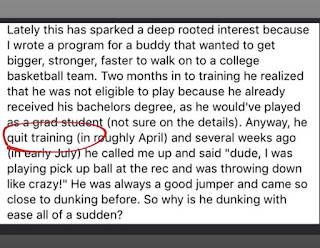 The big fear that people have about an easy training period is losing the abilities that they gained. It's important to realize the athletic performance qualities are not as fragile as people tend to think. With regular athletic activity, coordination does not go anywhere. With reduction or cessation of strength training and more off days, explosiveness and elasticity actually improve. Flexibility is easily maintained. Strength is really the only thing you have to worry about losing. On that topic, consider the following points... 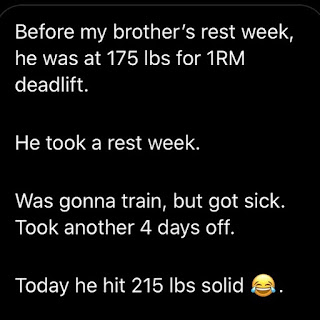 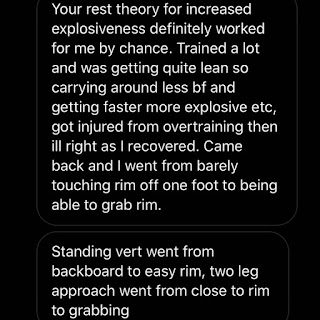 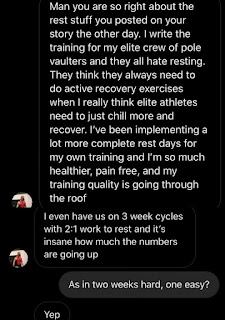 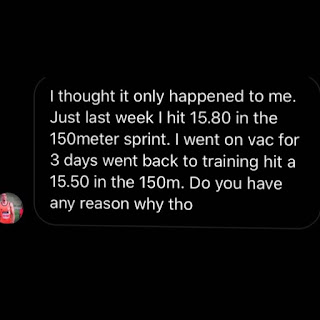 A long jumper I worked with provided more examples of the benefits of low training volume and rest. (1) When Dillon first started training with me he got fast results training just twice per week. (2) In the weeks leading up to the state track meet, he did very little training. We were trying to get him to bounce back from fatigue accumulated from high running volume in track practice. At state he hit a long jump personal record by 6 inches. It was 14 inches longer than what he was jumping in the second half of the season while fatigued. (3) After the state meet Dillon did not work out for 6 weeks straight. When he began training again, he returned to his highest max velocity ever within 12 days. Understand that he is fairly gifted genetically; I am not saying everyone should train exactly as he did. But acknowledge the principles and apply them to your situation. Here is a recap of a year of his training. Long Jump Case Study.

DO LESS, MY FRIENDS!