In a popular athletic development book, the author, Frans Bosch, cites force measurements in the achilles tendon of 3-6 x body weight (BW) in sprinting and 8-10 x BW in 1-leg jumping. Then comes this excerpt...

“If strength training is to give the calf muscles quantitative overload, resistance will have to be higher than an athlete is used to during his or her sporting movement. Assuming six times the athlete’s body weight on one leg during sprinting, the muscles should be loaded with at least six times the body weight. For a body weight of 75 kilograms, this would mean a barbell weight of 5x75 = 375 kilograms on the shoulders... which is quite impossible.”

Things like this upset me. The last sentence reflects complete ignorance of physics. The tension in the achilles is not equal to the weight being moved. Not even close. Bosch just stated that achilles force can reach super high levels when just moving body weight during sprinting and jumping. It makes no sense to then assume when it comes to weight training that a load of 6 x BW is required to reach force equal to 6 x BW in the achilles. Let’s do some better analysis.

First consider ground reaction force (GRF), which is equal and opposite to the force pushed into the ground. If you are just standing still, the upward GRF is equal to the force of gravity pulling down, AKA body weight. But when you move, when you accelerate your body, GRF exceeds BW. In particular if you have downward momentum and then push against the ground to accelerate upward and reverse that momentum as fast as possible, GRF can get very high. This is how one study reported GRF of 12 x BW during triple jump performed by collegiate athletes. Another study reported force as high as 22 x BW in an elite. Likewise in sprinting some elites apply 5 x BW into the ground. They do not have to put 4 x BW on the shoulders to do that.

The laws of motion remain the same in the weight room. When you do a calf raise, you accelerate upwards. That means GRF is exceeding the weight being moved. Just like in sports movement, if you use downward momentum and a fast reversal, GRF increases immensely.

But GRF is also not equal to achilles tension. Now consider how those two relate. Think of the foot as a lever that rotates at the ankle joint. Picture a calf raise performed on the ball of the foot. On the heel side the achilles pulls up. On the opposite side GRF pushes up. It’s like achilles tension and GRF are on the two sides of a teeter totter. The key factor is the achilles is closer to the axis of rotation, the ankle joint, so it has less leverage. (In physics terms it has a shorter moment arm.) It varies depending on the proportion of the foot, but it’s a low estimation to say the GRF moment arm is double the achilles moment arm. That means achilles tension has to be double the GRF just to maintain equilibrium. When the body is accelerating upward, it is greater than double GRF. 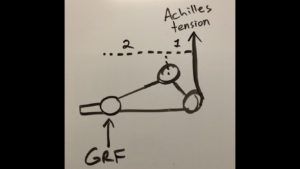 Therefore in a calf raise isometric hold on one leg with just body weight, there is already tension equal to 2 x BW in the achilles tendon. If fast lowering and a quick reversal out of the bottom is used, that tension will skyrocket. Peak tension depends heavily on the exact execution and the strength of the person, but it is not unreasonable to say achilles tension could exceed 6 x BW in a 1-leg heel raise with just body weight. It would be nice to have data to back that up. The only relevant data I found was in this study where achilles force exceeded 4 x BW in a calf raise on one leg, but the exercise was done on flat ground and not executed quickly. They were exploring rehab options, not trying to maximize force.

Let’s say you add additional load equal to body weight on the shoulders. Now an isometric hold on one leg produces achilles tension of 4 x BW. It requires a strong athlete, but if one were to then do fast calf raises up and down, it is quite reasonable to say achilles tension could exceed 10 x BW. This does not mean that calf raises are the ultimate calf training (keep reading), but they can definitely be used to overload the calf muscles.

This excerpt from the book is an example of a problem in the exercise field. Too often we completely botch physics. (Or “Bosch” physics?) We are supposed to be experts in human motion, yet we fail to accurately apply the laws of motion to the human body. We need to get better.

There is another point to be made here. An exercise actually DOES NOT need to overload the muscle/tendon in order to have value, because...

Structure is developed better by volume than by intensity.

Did you know cross country runners have exceptionally strong Achilles’ tendons? It’s not because of super high forces, but because of a high number of foot contacts. Yes, sprinters need to spike up and run fast. Jumpers need to jump high/far. Both may use some intense plyos. But the achilles and other tissues are developed for that by a base of thousands of less forceful foot contacts in submaximal running, hopping, etc. The video below shows two elite athletes, Asafa Powell and Bohdan Bondarenko, using low intensity volume in their training. Using a training schedule that lacks volume and only uses high intensity is actually a good way to get hurt. Some sports take care of this elastic volume for you. Some athletes that come to mind that might need to intentionally get more volume are dunkers, baseball players, football players in the off-season, track and field jumpers, and javelin throwers.


So where do calf raises fit into this? The unique thing about ankle extension strength is that the foot is always near a horizontal position during sports. This means gravity always has leverage, which means during sports we operate in a strength training position for the calf muscles. Thus when an athlete is using a high volume of running, jumping, etc, the case can be made that the calf is getting all the stimulus it needs.

With this in mind, calf/achilles development should largely come from athletic activity. This activity should include...

However there is still a case to be made for strength exercises.

We should not be relying primarily on calf raises for calf/achilles strength, but they still play a role.
Newer Post Older Post Home