Front Squats vs Back Squats

Among athletes and strength coaches there is much debate over which is better for athletes who need to get stronger, front squats or back squats. This debate is rather silly. Why does one have to be better? They are just different exercises. Both are good. However, when it comes to which squat to use as the foundation of a strength program, for most people there is a clear correct choice to this question and no need for further discussion.

The first thing to point out is everyone is capable of lifting more weight in a back squat than in a front squat. This is true across the board. Go ahead and test it. Typically people who are good at both versions can front squat ~85% of their max back squat. Along with being stronger, the back squat is also faster than a front squat at a given weight. This strength and speed gap is primarily the result of the front squat being limited by upper body strength. In the front rack position the supporting upper body muscles are at a mechanical disadvantage compared to the bar placement of a back squat. It is simply not possible to transfer the same force into the bar as in a back squat. The other possible contributor to the lack of front squat strength is a weaker leg and torso position. The goal of a front squat is to keep an upright torso with the knees moving far forward. If the lifter does this successfully enough, it turns the lift into more of a knee extension exercise rather than a hip and knee extension exercise. The result is lower strength and speed. However a lot of people do not have the quadriceps strength to execute a front squat in this way, so they end up shifting into a position more like a back squat anyway.

Given that the back squat is stronger and faster, centering training around the front squat instead would require some other very convincing arguments. The primary reasoning looks at the intended position of the two lifts. A good front squat uses a relatively upright torso and forward knees. Proponents of the front squat state that this is safer for the low back, teaches good lifting posture, and provides better quad strength. These may be legitimate claims if we are comparing an extreme upright front squat to a bent over back squat (see picture). 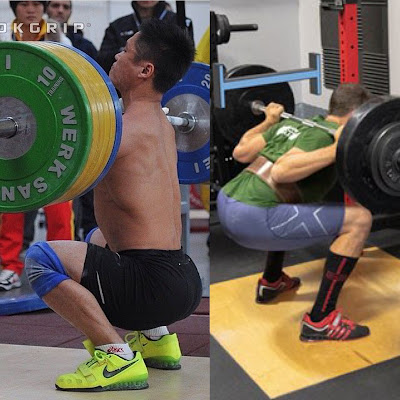 But here's the thing. A back squat does not have to look like that. We can aim for upright posture and forward knees in a back squat as well. The torso will not be as close to vertical, because it is positioned partially in front of the bar rather than behind. But that in itself does not mean the movement is more quad focused (more on that later). The pictures below show Lu Xiaojun, a world record holder in weightlifting, doing the two squat variations. Looking at this comparison, can we say that the front squat teaches good upright posture, and the back squat does not? Can we say that the front squat develops the quads more? Considering that the weight and/or speed are lower? Let me be clear on something. I fully support more upright squatting rather than bent over squatting. But an upright squat does not have to be a front squat. 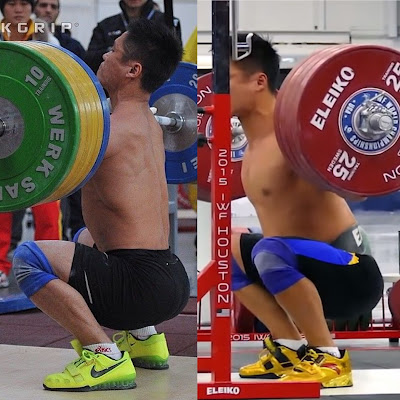 Let's assume that we are aiming for upright squatting. What we don't need to do is compare Lu Xiaojun's front squat to an average joe's back squat. Instead we need to consider a front squat and back squat performed by the same athlete. And instead of just looking at the angle of the torso, look at the path of the bar and where it moves relative to the hips and knees. This clues us in to the resistance torque from the barbell at the two joints and reveals how much of a quad strength stimulus is being delivered. See the video below.

If you view the squat through this lens, what you will often find is that the bar path is very similar in a front squat and back squat, assuming the lifter is trying to stay upright in both cases.

The mechanics are a product of the knee and hip extension torque of the athlete more so than the location of the barbell.

Those with proportionately strong knee extension are able to execute a quality upright squat. Those who are relatively weak in knee extension cannot, and moving the bar to the front rack position does not change this. Physics cannot be cheated. If a front squat places the bar in the same position relative to the knees, but uses a lighter weight, and/or moves the weight more slowly, then the front squat does not deliver a greater quad strength stimulus than the back squat. Rather it is just a weaker, slower, more miserable version of squat. 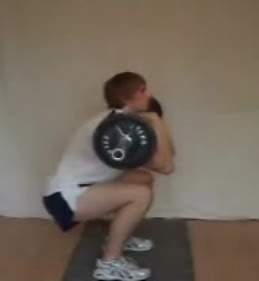 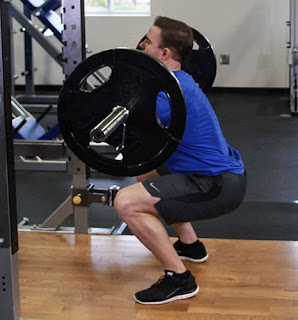 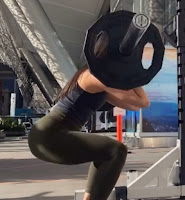 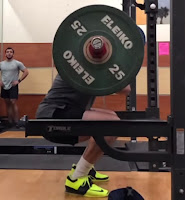 I am not trying to say front squats are worthless. I just want people to examine them critically and consider what they are really getting from the exercise. Don't assume it is a superior quad stimulus. It is typically not. Multiple examples have been shown where it is actually more of a hip extension exercise. Athletes like Lu Xiaojun can execute a front squat without shifting the bar forward, but they can also execute a back squat in a similar fashion with more weight and/or speed. So which is the greater quad stimulus? Front squat is still a perfectly fine squat variant; it does feature greater upper back and core demand; but variety is really the primary purpose it serves.

Of course it is possible that someone somewhere does a front squat in a way that makes it a greater quad stimulus. In this case, since the weight is lighter and the demand is focused on the quads, we know for certain that hip extension strength is neglected. Thus using front squats alone is insufficient. Even in this case, front squats should be viewed as a compliment to back squats, not a replacement.

We should acknowledge that there are multiple ways to develop strength. We could choose to use front squats for knee extension and deadlift variants for hip extension. Or we could train hip extension with split squat variants. Or we could not squat at all and use pistols, split squats, and hip thrusts instead. People have been successful with different approaches. But if we are going to discuss front squats vs back squats, the choice is clear. Back squats are a stronger lift and build a stronger athlete over time.

What about those crazy front squat videos?

One more thing to address is the fact that there are a lot of elite lifters who use front squats. Almost all of them are weightlifters. They have to front squat to finish the clean, so they have to be good at it. The fact that they can front squat extremely heavy weight does not mean that lift is what made them strong. Even though it is not specific to their sport, weightlifters still use back squats because they develop a higher level of strength. It's very easy to see a video of an elite olympic lifter front squatting 250kg and think that front squats are the key to getting strong. I believe this is where front squats get a lot of their credibility. It's important to realize that the same athlete who front squats 250kg probably back squats 300kg. So which is going to make that athlete stronger? The answer is clear. The point is not that front squats don't develop strength. It's just that back squats make you stronger.