What determines maximum sprint velocity? This question has been the source of much debate and confusion, but the answer is actually pretty simple, albeit counterintuitive. Although horizontal velocity is the goal of sprinting, it is actually vertical force application to the ground that determines how fast a person can sprint. This is the case because gravity is always pulling the body down, so sufficient vertical impulse (force x time) must always be generated to counteract gravity to prevent falling. As sprint speed increases, the time the foot can spend on the ground on each step inevitably decreases. This means that the necessary vertical impulse has to be generated within shorter time frames. This requires higher force applied to the ground very quickly. An athlete's ability to do this determines how fast he or she can sprint. 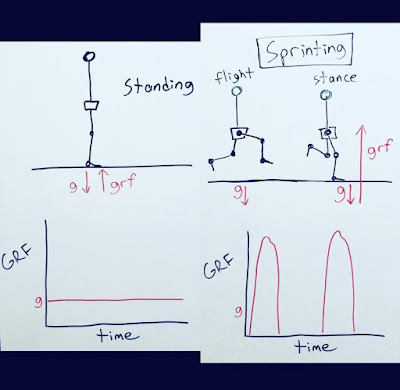 On the left in the picture above: When a person stands still, gravity pulls down and ground reaction force pushes up with equal force. A GRF vs time graph shows a steady line equal to the force of gravity. On the right: Sprinting has a flight phase in which neither foot is on the ground. During flight, gravity accelerates the body downward. So during stance a sprinter has to overcome gravity and accelerate the body upward to avoid falling. The resulting up and down motion is known as vertical oscillation. This requires quick spikes of vertical force on each foot contact (shown on the GRF vs time graph).The ability to generate these spikes in vertical force determines max velocity. 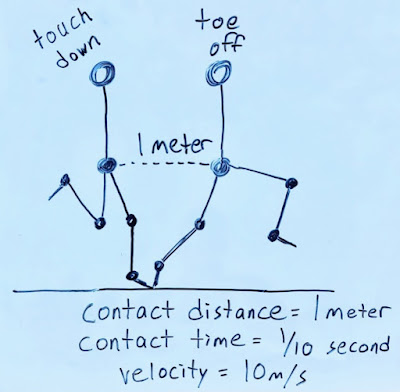 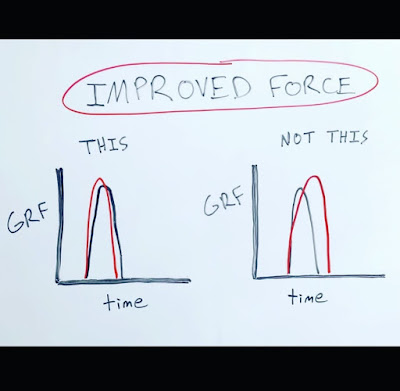 It is important to avoid misconceptions when talking about increasing vertical force. One mistake is thinking that this calls for a more dramatic stride producing greater vertical oscillation, basically what happens when you consciously run with really long strides. The problem with doing this is that both ground time and air time increase, which means stride rate (the number of steps taken per second) decreases. The graph on the right in the picture above shows what this might look like in a force curve. The red curve has higher peak force than the black curve, but it takes more time, so it does not produce greater velocity (unless the black curve represents running short and choppy).

What is actually needed is the same vertical oscillation but achieved in less time. The graph on the left above shows the required change in force application. The red curve yields higher velocity because the higher peak force gets the sprinter off the ground in less time. In beginners this change may come from altering technique, but long term this change comes from developing the capacity of the athlete to apply force really fast.

These claims are not just my belief. We have data on this. The graph below is from "Are running speeds maximized with simple-spring stance mechanics?" It shows clearly the change in vertical force application required to achieve higher velocity. 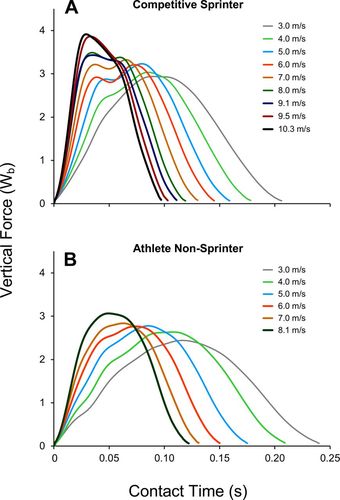 What about increasing stride rate and length?

Improving ground force application improves speed through some combination of stride rate and length changes. Exactly what those changes are will vary, and we really do not need to be concerned with the exact details. Here is an example scenario: 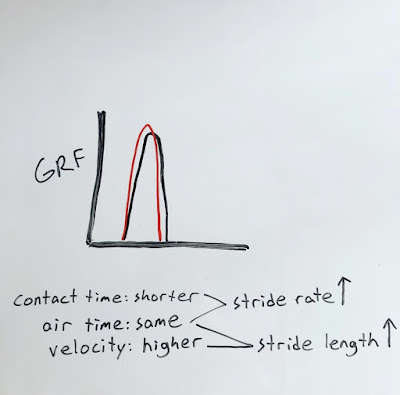 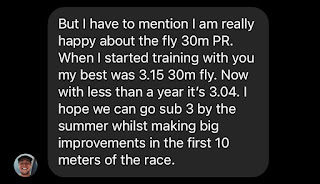 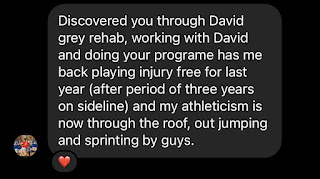