One of the things that drives me crazy is the misinterpretation of research results. I have most often seen this in the case of measuring physics outputs like force, impulse, or power. The world of sprinting research is rife with this kind of misinterpretation.

One example comes from a study (Spring Mass Characteristics of the Fastest Men on Earth) done on the 100m sprint final at the 2009 world championships, the race when Usain Bolt set his world record. The researchers used video analysis on the top 3 finishers to determine ground contact time and average vertical force relative to body weight. They found that Usain Bolt spent longer time on the ground and applied less vertical force relative to body weight than his two closest competitors. The results are summed up in the infographic below. 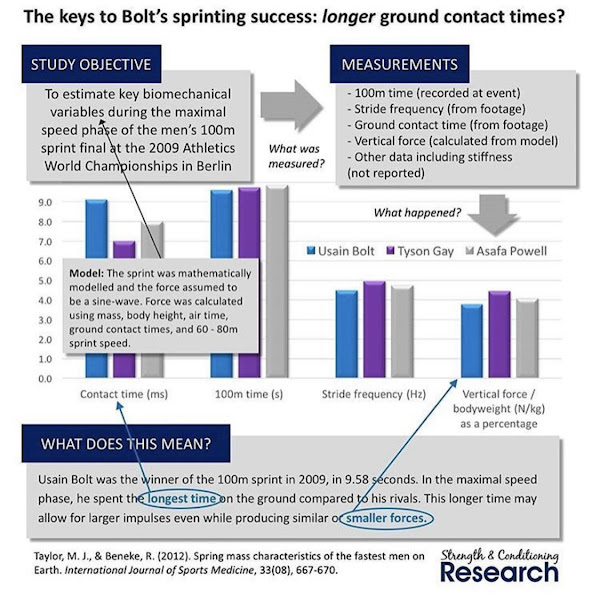 These results have been viewed by some as somewhat confounding evidence, because a previous study, (Faster top running speeds are achieved with greater ground forces not more rapid leg movements) showed conclusively that faster speeds are achieved by applying greater force and spending less time on the ground. This conclusion can also be reached using an understanding of the laws of motion and some common sense.

Let's bring back some clarity. The interaction between ground force and sprint velocity is well understood, and the 100m final data is actually not confounding or confusing at all. Applying greater vertical force over a shorter time frame produces higher running speeds. Check out Speed Science. Why does that trend not show up when comparing Usain Bolt to Tyson Gay? The explanation is easy. Bolt is significantly taller and uses a longer contact distance. Thus his body is able to move at a higher horizontal velocity even though he applies less relative force and spends longer on the ground. If you read and grasp the information on my Speed Science page, that should make perfect sense. So longer contact time is not a secret strategy that Bolt uses to gain an advantage. It's just what he is physically capable of doing. If he were to improve vertical force and reduce contact time, he would sprint even faster. How his contact time and relative force compare to that of a different sprinter is irrelevant.

Misinterpretations of data highlight how important it is to understand physics and be able to apply it to human movement. Sprinting is a highly dynamic task. The human body is an overwhelmingly complex object. If you're taking limited measurements on varied subjects and relying on comparison or correlations to get understanding, you can easily be mislead. In this case it is actually far better to be capable of applying newtonian physics than to be well acquainted with all the research data. I talk about this more in the video below. **DISCLAIMER: in the video I talk about skilled sprinters following a theoretically ideal technical model. In reality, this model is not perfectly followed by anyone and is actually physically impossible to execute in some ways.

Here is another study to consider. Technical ability of force application as a determinant factor of sprint performance. How meaningful do you think the correlations in this study are? What practical implications does this have on training? Do not forget about the laws of motion as you interpret the data.