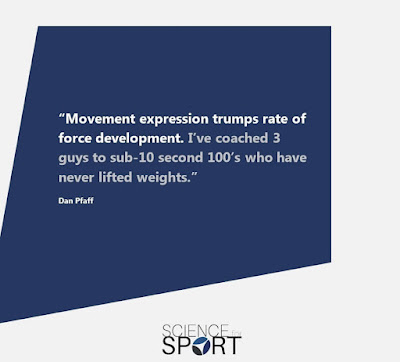 A quote from Dan Pfaff recently made the rounds through the athletic development community. Pfaff is obviously a great coach, and I do not intend to criticize him or judge him based on two sentences. But I will say that I do not like this quote. Let’s look at just the first sentence.

This is addressing the technique vs force production debate in sprinting. I will say plainly that I disagree with this statement. Rate of force development can refer to internal force, namely tension in muscles, tendons, and fascia. We do not have enlightening data on internal RFD during sprinting. But we do have extremely clear data on force applied to the ground. Examine the graphs of vertical ground forces from this study: Are running speeds maximized with simple-spring stance mechanics?

The first graph shows the vertical ground forces from several foot contacts of an elite female sprinter and a non-sprinter. It is clear that the higher velocity involves higher peak forces applied to the ground. 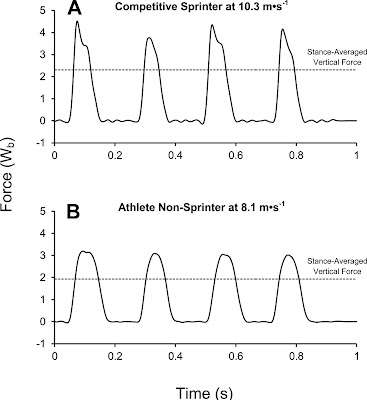 The second graph shows the pattern of force application in an upright running foot contact at various velocities. Again data from a female sprinter and non-sprinter is shown. It shows that sprinting faster requires higher force applied to the ground over a shorter time frame. For an explanation of why this interaction between vertical force and horizontal velocity is the way it is, check out Speed Science. 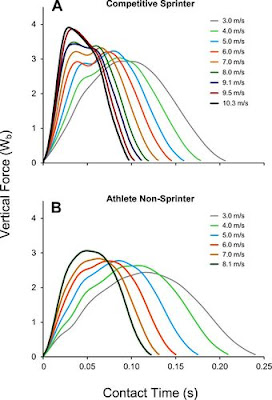 Higher vertical ground forces applied in less time always produce faster sprinting. There is no disconnect there. To say that anything trumps rate of force development in sprinting is inaccurate. From a theoretical view, vertical ground forces also have a profound influence on technique. The two cannot be separated. For a thorough explanation, see Speed Science (in depth).

Speaking practically, there is still discussion on how much emphasis should be placed on technique in max velocity development. I currently coach at a facility where speed technique is our calling card; I am definitely not proposing we abandon this aspect of training. But I will say based on my experience that if an athlete is not improving force production, that athlete is probably not getting faster. There are certain cases where a slight change in technique can cause an immediate increase in speed, but trying to alter technique over time without improving force into the ground is a fruitless pursuit. Second sentence...

This implies that these sub 10 sprinters did not have exceptional RFD, because they did not lift weights. In reality, physics tells us it is impossible to sprint at an elite level without elite ground forces. Those sub-10 sprinters absolutely had incredible RFD even if they didn’t lift weights. Again, there is no disconnect between ground force and speed. The actual disconnect is between ground forces during sprinting and strength in the weight room. Those are two very different things, and this difference is likely what Pfaff intended to highlight with his comment about lifting.

Let’s consider two key points. (1) Fascia in the foot, ankle, and leg may be a significant contributor to ground forces during sprinting. This force is quick, somewhat involuntary, and separate from muscular RFD. Weight room strength does not develop this fascial contribution, and some exercises may diminish it over time. (2) Even if we look at just muscular force, strength training can contribute to increase in RFD, but it can also decrease RFD, especially within the first tenth of a second. The graph below shows data from “Effects of heavy resistance and explosive-type strength training methods on mechanical, functional, and metabolic aspects of performance.” (Komi et al. 1982) This shows the different influence on muscular force production of strength and power training. Now imagine the difference between strength and sprinting!

If I were to re-write Pfaff's quote, the first sentence would be, “Producing force really fast and being extremely stiff and elastic trumps being really strong.” This, rather than “movement expression,” is a more accurate description of the physical qualities that separate strength and speed.